Skip to content
Thomas Sijtsma on his 1st Ironman: ‘I mostly remember the heat and triathletes lying next to the road’
Back to overview

Thomas Sijtsma on his 1st Ironman: ‘I mostly remember the heat and triathletes lying next to the road’

Do you remember your first triathlon? Can you still recall the heat and all the unexpected troubles along the way? Thomas Sijtsma does. He did his first Ironman last summer while it was 39 degrees. 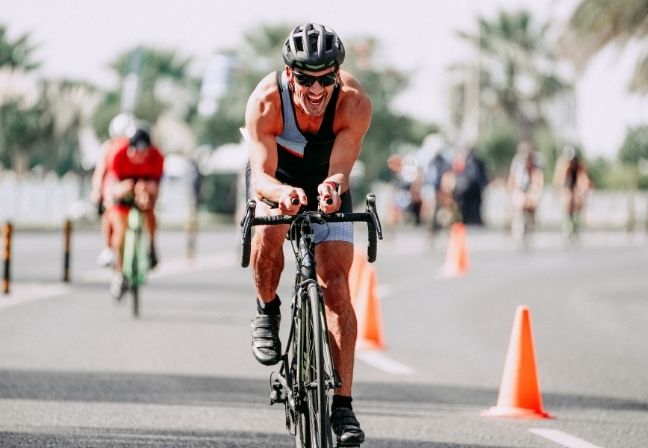 Thomas Sijtsma is one of the few crazy triathletes that dreamed about a complete Ironman, started training for it, and eventually completed it. As well as this he works as a sports journalist.

Due to the heat, he had to change his time goal. Thanks to his dedicated training sessions, he was able to finish in 12 hours and 21 minutes. A great achievement for a first triathlon in that heat, but does this good beginning demand a second attempt?

When did you start training for a triathlon?
“When I started working as a journalist, I played soccer. After a couple of years, I wanted to become very good at different sports. That’s why I joined a triathlon club. Combining three sports instead of choosing one was new and challenging. After finishing my first marathon, I still wasn’t thinking about doing a whole Ironman. But after participating in challenge after challenge, my confidence grew, and after months of training I was ready to do the Ironman in Frankfurt.

And it was bloody hot.
“Yes. It was very hot! When I heard it would be 39 degrees, I needed to change my time goal. A couple of days after the Ironman I was going to report on the Tour de France, so there wasn’t much time to recover. I just couldn’t take the risk, so I just wanted to make it to the finish line.”

How did you get there?
“A lot of things turned out differently. For example, the water was too warm to wear a wetsuit so I lost quite a lot of time on that. During the race, I tried to eat and drink as much as I could. This is already challenging during an Ironman with normal temperatures, so in 39 degrees I needed to pay it even more attention. The organization considered a cut version of the Ironman. I was very happy that the distance of the race stayed the same. I just wanted to do the complete Ironman, so I was happy to hear I could do the whole distance.”

Did you have the same thought during the Ironman itself?
“Well, it was hard of course. I cycled through hot air and I saw different triathletes on the side of the road, not able to continue the race. I thought to myself, those people trained hard like I did and are now lying next to the road. This is serious. Unfortunately, after a while I got lightheaded myself and the thought of quitting came really close.”

But you kept moving. What was your mindset?
“I just tried to survive with a lot of water and food. I mostly ate bananas. After cycling I sat down to get ready for my run. A guy next to me’s head was shaking. The worst was still to come, he said. I was very glad when I found that wasn’t the case for me. The wind during running was cooler. I kept myself cold with ice in my suit, and cold showers. During the first twenty kilometres, I was doing fine. From then I knew I could make it until the finish line.”

A couple of months later, do you have a new goal already?
“Not yet. I will take it easy for a while. I’m still training because I like to be fit. I will do another Ironman someday, but I hope it will be cooler.”

As a journalist, you talk to athletes all the time. How did triathletes inspire you to do an Ironman for yourself?
“I admire triathletes for their mindset. A lot of triathletes have very busy jobs and are still able to combine it with many hours of training. During their training, they focus completely on the goal.”

Read more: Tristan Olij: ‘Winning is all about the preparations you are willing to do’

Thomas after his Ironman: