Skip to content
TrueForce Technology: the science
Back to overview

It is common knowledge that people put out less power indoors than outdoors. If you have ever measured your power with the same power meter indoors and outdoors, you probably found the same.

The common folklore is that this is due to boredom and heat. But the more we thought about that, the sillier it sounded. In a basement with a fan you are a lot cooler than on a mountain climb at slow speed with the sun burning down on you. Also, riding the same training route as you usually do is a lot more boring than watching Mr Willis save yet another building or The Avengers yet another planet, right? And in that burning sun or on that boring training lap you do put out the powers that you are capable of.

Dive in our science behind the TrueForce Technology.

So indoor cycling should be seen as a sport different from outdoor cycling. Otherwise, it would feel the same and you would put out the same power. But don’t take our word for it. There is a large body of scientific work that shows this. People deliver less power indoors (Mieras, 2014) or they find it a lot more strenuous (Bertucci, 2007).

In the Mieras study people were asked to ride 40 km at a fast pace without knowing how fast they were going, nor what their heart-rate was. The results were shocking: indoors the subjects delivered less power. During the Bertucci study, people were asked to ride at various levels both indoors and outdoors. When asked how strenuous it felt, the subjects consistently indicated that indoors felt a lot more strenuous. Moreover, this study found that the force profiles indoors were significantly different from outdoors! The conclusion of both studies is: “If you have the possibility, you can better train outdoors.” But not everybody has the time or finds him or herself in a location to ride outside whenever they want. That is where the TrueBike comes in: We keep you going.

This study shows us that cyclists are producing significantly less power during indoor cycling compared to outdoor cycling. Mieras tested this by having people cycle a 40 km time trial indoors and outdoors.

We keep you going

The conclusion of both studies is: “If you have the possibility, you can better train outdoors.” But not everybody has the time or finds him or herself in a location to ride outside whenever they want. That is where the TrueBike comes in: We bring the outside to you!

Both studies also had some interesting conclusions about the difference between outdoor and indoor training. To summarize these were:

How TrueForce Technology solves the problem

We truly believe that the power output difference between outdoor and indoor training is unnecessary.
Read further below, and we’ll show you why and how we tackled this for good.

The science behind TrueForce Technology

The science behind the technology and the TrueBike is simple and straightforward: We keep you going. By replicating the resistance on the pedals during cycling outdoors, we are able to achieve the right neuromuscular load indoors.

Let’s have look at the picture below. When you ride outdoors you activate your muscles in a very distinct pattern as shown on the right force circles: Most of your power is put in through the big muscles in your legs: your buttocks first, and then your quadriceps. These are very big and strong since you constantly use them for standing, walking and running.

The current indoor trainers, on the other hand, have a flywheel that is supposed to represent the inertia of your body (and bike) weight that you experience outdoors. In reality, however, that flywheel is usually a factor of 10-20 too light, resulting in pedal forces that look much more like the force circles on the left: Only a little force can be put into the lightweight flywheel because it accelerates quickly as you start pushing. This is the whining sound you hear with every push: the speed of the flywheel increases. As a result, your buttocks and quads cannot push as hard as they want.

Stand still versus rolling for minutes

But then, when you reach the top/bottom dead-point the lightweight get’s slowed down a lot by the simulated wind, road, and climbing resistance. You notice this when you stop pedaling: You come to a standstill within seconds whilst on the road you roll for minutes. So to keep going you have to use the muscles in your calves, the back of your legs (hamstrings), and even the muscles that lift your knees. Since this is very different from reality, these muscle groups are not well trained and therefore tire much quicker.

So by training on the TrueBike, the idea is that you get even more from your workout, by getting the same neuro-muscular stimulation (i.e. your muscles are loaded with the same forces and contract at the same speed) as you do outdoors. That way you train the way you would train outdoors.

TrueForce Technology: it’s all about robotics

A new approach to indoor cycling
The TrueBike takes a completely new approach to indoor cycling. We don’t use a flywheel at all. Simply because we don’t know what you weigh, but more importantly because we are pretty convinced you don’t want an indoor trainer that weighs 450 kg (1000 lbs). Because that is what it would roughly take to have an accurate simulation of your weight on the road. Seriously: how would you get that to your attic, and how would you keep it there?! Why so much? Well, then we get into some really boring stuff with rotational moments of inertia, bearing choice and safety measures.

Also, since your pedal push is strongest when you move the slowest, we don’t rely on electromagnetic (also called Eddy current, used in most higher-end indoor trainers), fluid (viscous), or wind forces to guide your pedals. We use a very strong motor in our robot, straight out of a car. Since we labeled this section the science section we will show you in a graph. As you can see, a motor can deliver a force, even at standstill (also known as the holding torque). This is how cranes and elevators work. They can hold your weight like we can hold your pedal force, even at low speeds.

That gives you the unique sensation when standing up and riding up a hill: Your pedals hold your weight and you don’t fall through! But … there is a limit here. Due to safety and wear considerations, you can go down to about 30 rpm, and below that even our motor gets a bit sloppy with its placement accuracy (normal cycling is between 80-100 rpm). 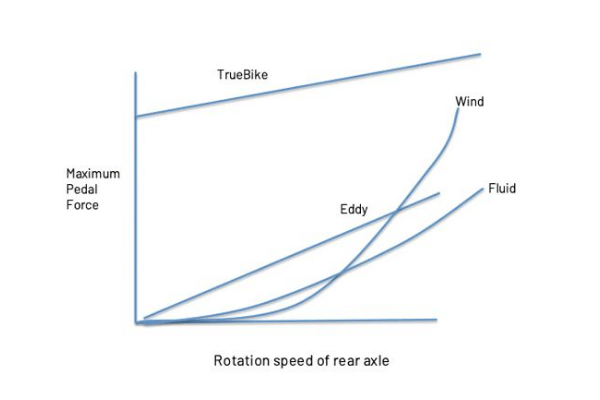 Maximum pedal force as a function of the rotation speed of the rear axle. This means that if you cycle at low rpm or cycle in a low gear, the maximum resistance of the existing smart trainers is very limited.

Why we started with the TrueBike

Electric currents mimic body weight
We have made a couple of important choices in the development of the TrueBike.

First, we have chosen not to use weight to mimic your body weight. Because the kinetic energy that is stored in your body and bike when you are traveling at 40 km/h (25 mph) is astounding. Think of how long you need to brake at your hardest if you are traveling at those speeds, or maybe more vividly, think of the carnage if you would hit a wall.

We didn’t think it was a good idea to put that kind of energy in your living room. In fact, nobody does, that is why all the trainers and spinning bikes have such low-weight flywheels (even though the whole machine is quite heavy).

To put in realistic weight at the speeds required would require a whole different type of safety and construction. So we use electric currents (very big currents) to solve this issue. The cool thing about currents is that you can dump them almost instantaneously.

A Dutch sturdy frame
Second, it is a bike, not a trainer. A number of the people at TrueKinetix have broken their precious carbon frames (even time trial frames) on indoor trainers. No, they did not split in half. But the cracks were so severe that the manufacturers of the frames, when shown the pictures, were very adamant that we hang those frames on the wall and never take them down again.

But there is simple logic to it, too. Look at the rear fork for your bike. That slim and light weight triangle is meant to carry your weight and the strain of your chain. It is not designed to be clamped into a holder after which you start swaying side to side with 80 kg (180 lbs). And in all fairness, we are big Dutch guys and for us it is more like 95 kg (210 lbs). But, since we test the bike ourselves that should give you some confidence about it’s sturdiness, even though the frame is not wider than a normal roadbike frame.

TrueKinetix has been working on the development of an indoor vibrating bicycle, in collaboration with two partners and with the help of the MIT subsidy from the province of North Holland. TrueKinetix has developed the drive train, software, and hardware for this. Due to Corona, it has not been possible to test the bike in practice with patients. This will be taken up as soon as it is possible again.

TrueKinetix has been working on the development of an indoor vibrating bicycle, in collaboration with two partners and with the help of the MIT subsidy from the province of North Holland. TrueKinetix has developed the drive train, software and hardware for this. Due to Corona, it has not been possible to test the bike in practice with patients. This will be taken up as soon as it is possible again.